skip to main | skip to sidebar

Unfortunately I did not journal my first experience with home brewing. It started off as a mild curiosity and then fate intervened - my friend Kirk Herrmann, for whom the brewery is named, gave me his unused True Brew Gold Kit. It came with a 6 gallon glass carboy - which I have since destroyed - a 7.8 gallon bottling bucket with a spigot, various tubes, a racking cane, and a three-piece airlock complete with bung for the bunghole! Kirk was moving to Germany and had received the kit for his birthday before making his first recipe, an Octoberfest. So my first beer was Kirktoberfest, and thus began the Herrmann Brew Company. For those of you curious as I was, if you can make pasta, you can brew a beer. The most basic process, and how I started are listed below.

My soon to be brother-in-law-in-law - his fiance is my wife's sister - has been dieing to make a beer and so on a visit to my hometown, Lafayette, I brought most of the equipment listed above and we set out to brew a simple ale.

Trey, my b-in-lw-in-lw, and I set out to craft a simple extract recipe. At the inception of this blog I began brewing in the all-grain fashion, which is to extract sugars from the roasted grain itself. This method is time-consuming and requires specialized equipment, but anyone who can make pasta can make an extract recipe. Extract refers to a thick solution that is all of the sugars made by the grain boiled down into a syrup. It is much easier to manage but you limited by the types of grains used by the extractor. It takes: 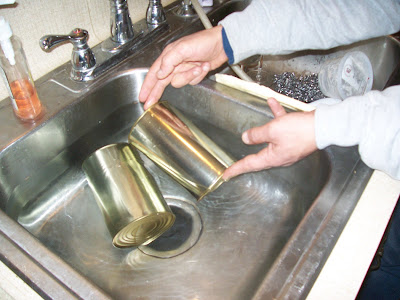 6.6 lbs of Liquid Malt Extract. This recipe I got a 3.3lb can of Wheat Malt and a 3.3lb can of Extra Light Barley Malt. The Barley comes in grades of Light, Extra Light, Amber, and Dark. This gave me a straight 6.6 lbs of sugar and little Honey rounds it up to 7 and a half pounds. 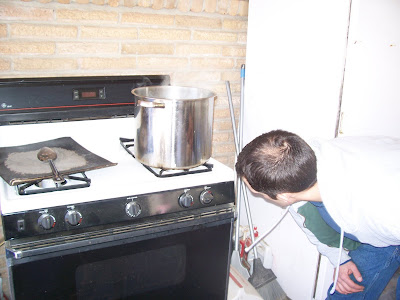 A Large Stockpot. This one is 5 gallons in which I boiled 4 down to 3.5gallons. I've used pots as small as 3 gallons, but the larger the better. 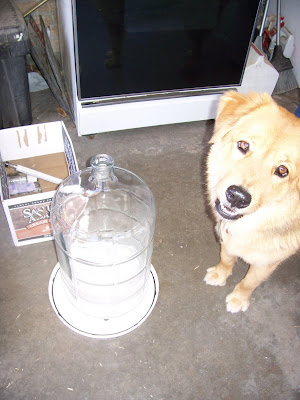 A Primary Fermentation Vessel. This is a six gallon glass carboy. It can ferment five gallons of beer and leave head room enough for yeast head. A food-grade - plastic or stainless steel vessel will work as well. Doggie not included. 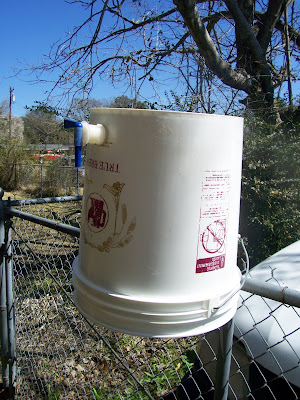 A Spigoted Plastic Bucket or Bottling Bucket is useful, but not essential. 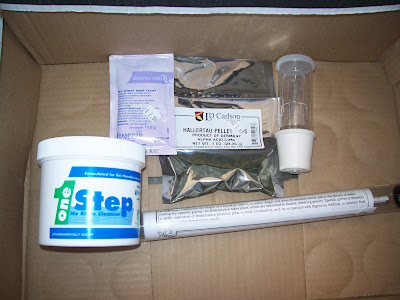 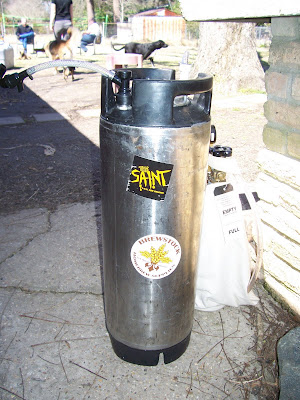 Five Gallons of Pre-Made HomeBrew. Not essential, but it sure does help. For this occasion we drank a classic recipe made with Grapefruit instead of Apricot: 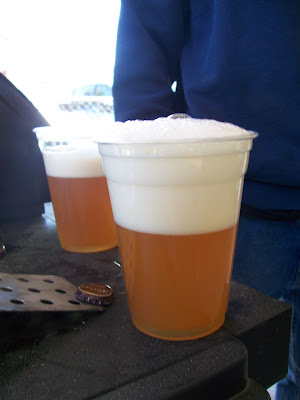 Bring to boil as much water you can fit into your stockpot. Mine held approximately 4 gallons - though I did not measure. Remove from heat and add sugars while stirring. It is important to remove from heat because the risk of scorching is great. 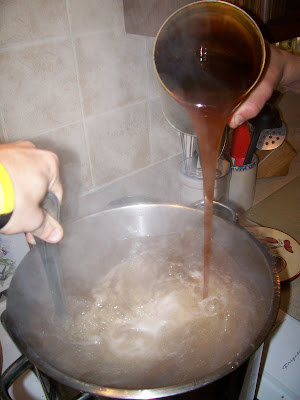 Stir thoroughly as to dissolve as much of the sugars as possible and return to a boil. 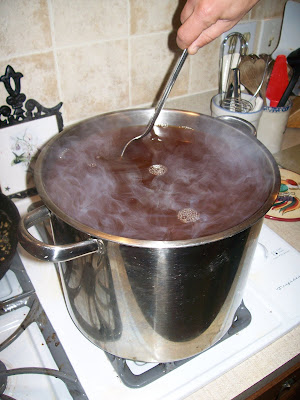 It will take some time to return this dense sugar solution to a boil so stir sporatically and when it reaches a rolling-boil add your hops. 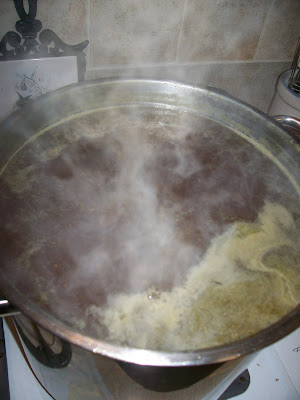 The hops addition is volatile so be careful. You are introducing cold oils to a boiling concoction and the probability of boil-over is close to certain. Reduce the heat and add the hops slowly, stiring throughout the process. When the concoction returns to a rolling boil start the timer for 1 hour. Use this time to take care to clean and sanitize everything that will come into contact with the beer after the boil is over. This includes the bottling bucket, carboy, and airlock. 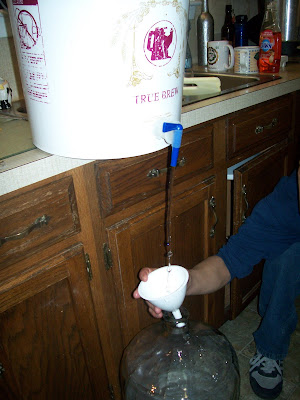 Some beers call for secondary hops addition, tertiary hops addition or other additions, but this ale was easy. Sit it and forget it. After an hour create a whirlpool to drag the sediment to the bottom. 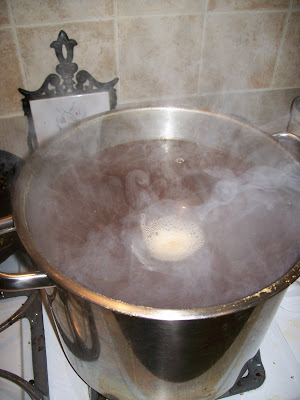 The hour of hops boil will pull all the alpha oils from the hops to bitter the beer appropriately and when it is over you want to create a homeostasis environment suitable for yeast proliferation. Adding the yeast to a 212 degree boiling brew will have the same effect as cooking a lobster. The unfermented beer, called wort, needs to be cooled. An ice-bath or a large freezer will bring it down to about 90 degrees in a quick enough manner. 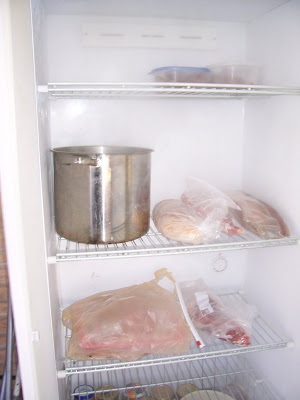 Ninety degrees is a suitable temperature for yeast proliferation. Although I did not measure the rule of thumbs in no steam rising or the pot is touchable. 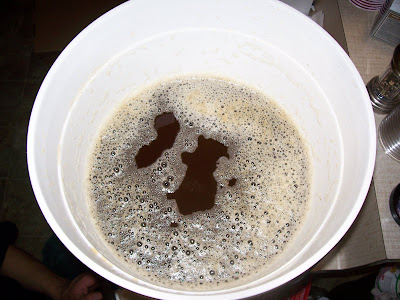 We poured the wort into the bottling bucket and watered it down to five gallon. We ended up with 2.5 gallons of syrup solution and used 2.5 gallons of Lafayette tap water. Some purist will use distilled or ionized water, but I've learned to care less about purity and enjoy the local color. 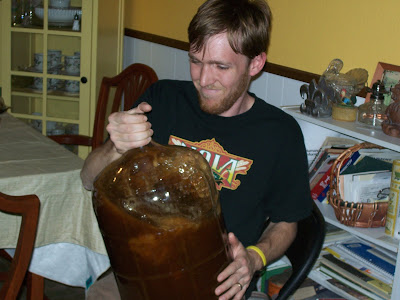 The next step in a homeostasis environment is to create an oxygen rich environment. Yeast, like plant, eats oxygen and creates carbon dioxide. On the flip side bacteria exist in the air so it is essential to disperse oxygen throughout the wort. This can be accomplished by shaking the carboy in a process calld "Rock the baby," or , if you have a bottling bucket you can create a cascade. 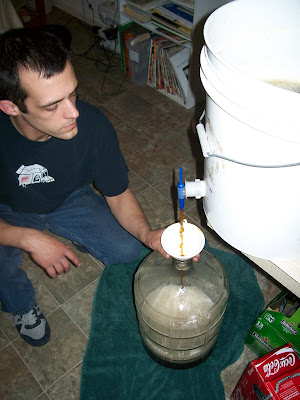 Pour your watered down wort through the spigot and into your sanitized glass carboy. This will churn the wort into the surrounding air. At about half way through cut the flow and pitch your yeast into the carboy. Pour the rest of the solution and cap your carboy. 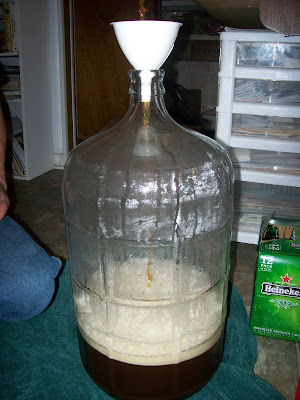 From there find a cool dark place - like a closet - with a relatively constant temperature and let the yeast eat the sugar, piss alcohol, fart CO2 and have sex with itself until its eaten all its sugars and falls dormant. This primary fermentation stage should take 5-7 days and you can see the airlock bubbling to be sure. 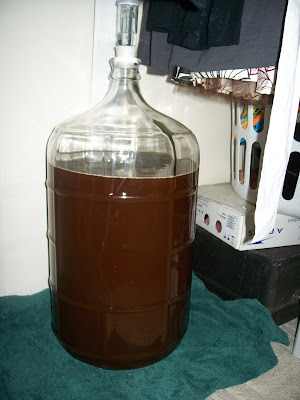 As the week passes keep an eye on your carboy. You will see the airlock bubble with rapid succession as the fermentation escalates. It is not uncommon for the yeast to emit a bubbly head and if overly violent it could pop the airlock off. 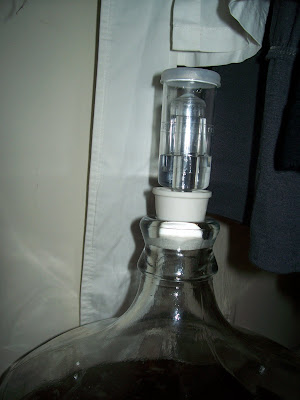 I don't anticipate this to happen, but coming up we'll outline the next steps leading to consumption. It could take as little as one week or up to a year.
Update: 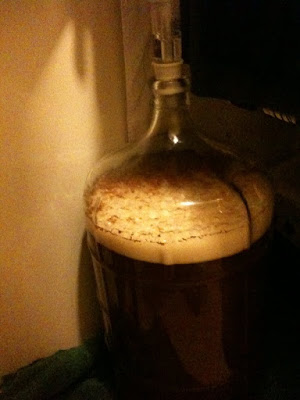 After a few short hours, four or so, we have a healthy yeast head. The airlock is bubbling rapidly and all seems well. This short amount of time is not common and signifies the yeast is happy and healthy. As they say Happy Yeast Makes Happy Beer. Overnight it should cool down and the fermentation should slow, but, unless it gets too cold, the yeast will eat all sugars available. 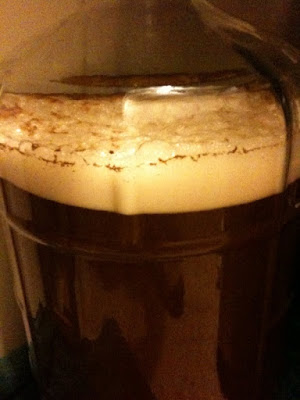 One thing I am concerned about is if this rapid, violent fermentation continues the yeast head (above) could expand its way up the carboy's neck and leech into the airlock. Worse yet if the CO2 produced reaches too high a pressure for the airlock to handle it could pop off all together and spew yeast head all over my sister-in-law's closet. Yikes!
Posted by Benjamin McHargrave at 2:09 PM